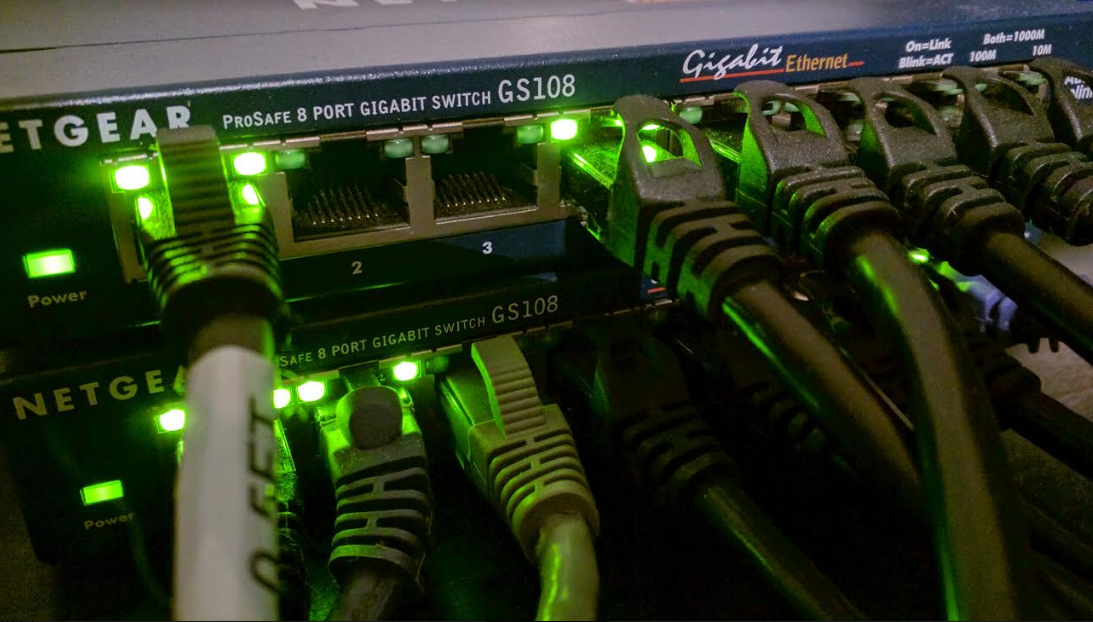 If you want to skip the boring parts below:

At its base-level, a network is a really simple thing — just a wire from each computer, plugged-in to a box.  Sort of like plumbing and pipes that carry water from one place to another — just a series of tubes.  🙂

For a consignment store, this can mean anything from not being able to get on the Internet, to your consignment software crashing, to just one or two computers getting ‘unable to connect to database’ errors.

So I’ve found it really helps to have a clear picture — literally — of your network setup.  Let’s take a look at a few setups and how these relate to a consignment or resale store…

In a smaller store, you might only have one computer.  It’s also not uncommon to have an ‘all-in-one’ router/modem combo — i.e. a single box that both connects you to the Internet, as well as providing firewall, network sharing, and WiFi functionality.

So here’s what a smaller store’s setup might look like — one computer, plugged-in to the router/all-in-one (even if it’s WiFi, it’s a ‘virtual’ wire), and then to the cloud!

For you, your issues could range from not being able to get online, to experiencing *slow* Internet, or even ‘connection failures’ in Liberty.  Possible sources of your issues and steps to troubleshoot:

Next, let’s move on to a store that has two computers.  Contrary to popular belief, the two computers do not *plug-in to each other*.  Instead, both of the computers plug-in to a box (your router) and that’s how they share your consignment software’s database, as well as share an Internet connection.

One of the most common issues in this kind of setup, is computer #2 cannot open the consignment software/gets database errors.  This is because it relies on getting through the network, over to the database that resides on computer #1.  If it can’t connect at all, but could *yesterday*, check the network cable — it’s amazing how common a bad/broken network cable is used, which means it slips out of the network jack.  Always use network cables that properly clip-in to place — if your network cables can be pulled out without having to press that little, plastic tab, throw them away and replace them.

There are other issues that can arise in this setup as well:

For larger stores, or stores with “computers up front” for point of sale, the network layout starts to get a bit more ‘complex’.  Basically, instead of all of the computers plugging-in directly to the router, they use an ‘extension’ of sorts — i.e. a network switch.

In the setup below, notice how computer #3 and #4 connect to a little box (network switch) and then that box connects to the router.  This creates a point of failure — e.g. if that network switch breaks, loses power, or becomes disconnected, then only those two computers won’t be able to get online or open your consignment software.

So this is how you can run into issues such as, “Only the computers on this side of the store can’t connect, but all of the other ones can!”

In a setup like this, it’s important to know where that little network switch is, to ensure all of the network cables are new and ‘clip’ in to place, and I’d even recommend putting that network switch on a battery backup.

And lastly, some stores have a dedicated modem with their own router — this is the setup we recommend (See: Why You Should Not Utilize Your ISP’s Router).  Some — even techs — use the terms ‘modem’ and ‘router’ interchangeably.  These are two different *things* with different functions.  ISPs have taken to putting both in one box — i.e. an ‘all-in-one’.  This can seem to be convenient, but using an all-in-one comes with a variety of issues:

By having your own, dedicated modem, it helps alleviate the issues outlined above, but you can also run into issues if the modem loses power — e.g. you won’t be able to get online, but you will still be able to use your consignment software throughout the store.

That last one, is really important, because even though most of the consignment programs do not require an Internet connection, Internet-connectivity issues with an all-in-one can prevent your consignment software from running.

If there’s one takeaway from all of the gibberish above, it’s this — just make sure you (and your employees) have a basic understanding of how all of the computers plug-in to the network.  This alone, can help prevent down-time and minimize the amount of stress that comes from not knowing what the heck the issue could be.  🙂